At present, there are many types of concrete mixers on the market. According to the actual production needs of users, they can be divided into two types: free fall type and forced type. Js1000 concrete mixer manufacturers will introduce five differences between the two.

The advantages of the js1000 concrete mixer are good mixing quality, fast mixing speed, high production efficiency, simple and safe operation, etc. The disadvantage is that the machine parts are seriously worn. Generally, high-strength alloy steel or other wear-resistant materials are used as linings, which are mostly used in centralized mixing stations. The advantage of the self-falling concrete mixer is that it uses the weight of the material in the mixing drum to work, which saves energy. The disadvantage is the influence of the adhesion and friction of the material. The mixing process has greater wear on the concrete aggregate, which has an adverse effect on the quality of the concrete. 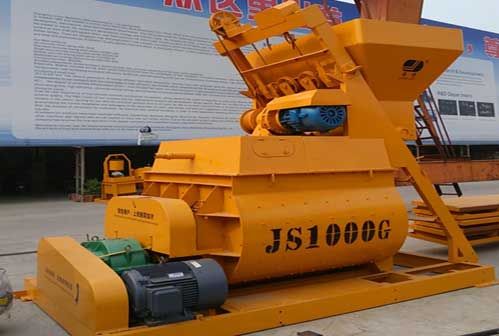 js1000 concrete mixer is a non-moving tank, which is stirred and mixed with the mixing claws, and its effect and efficiency are better than that of the free-fall type. The self-falling concrete mixer relies on the rotation of the mixing tank to raise the internal concrete to the upper part of the tank and then fall down, so that it is continuously circulated and mixed.