Home  >  Solutions  >  How to Deal With Metering Problem of Mixing Plant

How to Deal With Metering Problem of Mixing Plant

Does the mixing station measure wrong how to deal with?

So, under the daily situation, encountered the mixing station weighing problem how should we deal with it?

First of all, to recognize the mixing station weighing sensor

A weighing sensor is a device that converts an object's mass signal into a measurable electrical signal output.

From the above definition, we can know that a weighing sensor is an electrical component by which we can measure the weight of the raw materials we need.

Both the working principle of about the same, sensors built into the elastic element, if there are external forces, on which the elastic element deformation will occur, and adhesion on the resistors, so will produce deformation resistance resistance will change, through the change of the resistance, the output of the sensor will change the current or voltage, this process will object is converted into electrical signals, the weight of the electrical signal through interpretation, finally through the display screen, this is what we are weighing the weight of the object value. 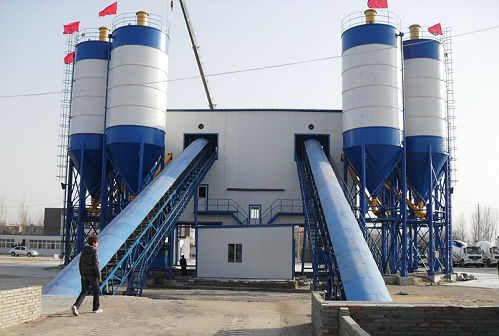 The reasons for the above faults are as follows: a, sensor damage, b, circuit break, c, signal transmitter fault, d, poor junction box contact

A. Sensor damage: the voltage value of signal line is output by the sensor when raw materials are on the blank scale and on the scale. If the two values are the same, the sensor has been damaged. According to the figure below, the output signal of the sensor is detected. The working principle and boundary mode of the sensors of different brands are roughly the same. The figure below is the wiring principle of the 6-wire sensor.

C. Signal transmitter fault: after eliminating the above two reasons, we will finally check the signal transmitter. The detection method is basically the same as that of the sensor.

D. Poor contact of junction box: this is mainly caused by the failure to connect the end firmly when wiring.

2. The weighing value fluctuates up and down

This phenomenon is manifested in the fact that a certain weight value fluctuates above and below the normal error range.

Main reasons: a, the mechanical vibration near the sensor is large, b, there is a high frequency signal transmitter near the hzs75 stationary concrete batching plant (including mobile signal tower, ultra-high voltage substation)

If the bin attached to the sensor mount is subjected to mechanical vibration in a large range, the deformation of the sensor will be constantly changing, so that the weight value measured will fluctuate up and down.

As for the problem of signal interference in the vicinity of mixing station, this should be in the early stage of the station should choose a reasonable site, away from these sources of interference.

The weighing sensor is a precise electrical component, which needs to be kept away from dust, water and other substances. It is necessary to keep the surroundings of the sensor clean. Therefore, some protective cover can be added to the sensor. At the same time, the weighing system needs to be recalibrated at regular intervals.

When checking the failure of the weighing system, we had better adopt the elimination method to minimize the root cause of the problem.

We hope that the content Shared by hzs75 stationary concrete batching plant suppliers can help you. If you have any other problems, you can leave a message on our website or call our manager on our website. We will reply to you as soon as possible.